If your blog gets most of its traffic from US, then you would sign up for Amazon Affiliate program or affiliate networks under Shareasale and Commission Junction (CJ).

Update August 2020: I have also discovered and signed up with ACCESSTRADE network affiliate. I have also revised and update the information in the article below as there are changes in process and advertisers. 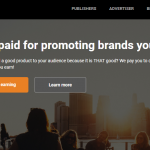 I signed up with Involve Asia in November 2017. This comes because I have a few blogs whereby most of my traffic comes from Malaysia, Thailand and Singapore (based on my Google Analytics report).

The sign off requires approval to be accepted into the program but I got the answer within a day.

Reasons why I signed up with Involve Asia:

If your traffic comes mainly from Asia countries especially the ASEAN region then you can feature affiliate programs of the merchant based on the niche of your blog (it is important for your blog to have a niche).

For example in Malaysia there are a number of popular merchants that are on board with Involve Asia such as Lazada, 11street, Malaysian Airlines, Agoda and Happy Bunch.

2. A Malaysian company for Asia market

Honestly as a blogger from Asia, it is hard to make a living because popular platforms such as Google Adsense, Amazon Affiliate program, CJ and Media.net pays a high CPC (cost-per-click) for US and Europe traffic due to the higher spending power of the countries.

For instance, USD500 is considered low end to design a website. USD250 is considered extremely cheap and most web developers there would not want to do a site for you for that price. Whereas in Malaysia, small business would not even want to pay RM500 (less than USD150) for a site. With a lower budget, advertisers targeting Asia market would not need to pay so much hence here is a huge difference where your traffic comes from.

Google Adsense or Media.net would pay per click… however the earnings per click is very low and you would need a huge traffic to make a difference. Sometimes we earn only few cents each time someone clicks on an ad. Whereas Involve Asia is an affiliate network hence it only pay you based on a percentage of the confirmed sales referred by you. It is either all or nothing but there is a potentially high earning power.

One thing is that Involve Asia provides an avenue for bloggers, especially those who in their native language would be able to benefit by signing up with Involve Asia.

For example, if I am from Thailand and blog in Thai language, I would probably not be able to get quality ad placement because the advertiser would likely target the keywords only in English. If I am under Involve Asia, there are a number of merchants from Thailand like , Lazada (TH), , Kinokuniya (TH) (new ones in 2020: Office Mate, Tops) which I am able to target if my audience are from Thailand.

3. It is easier to consolidate your earnings via an affiliate network than to sign up individually with each company

Some companies like Lazada, Shopee and Zalora also offer their own affiliate program. However, I find it a little of a hassle to sign up individually and to track the earnings separately. Another thing is most merchants would only pay with you hit a minimum earning amount like USD50 which may take a long time to achieve.

Update: Involve Asia is no longer providing personalized account managers for each publisher. If you did not perform well, then you would be serviced by their customer support.

. If you need advice or guidance, you can email to the person to seek advise such as how to improve placement or certain things that you are unsure of.

5. More choices to offer your visitors under one roof

For example if I were to write a travel blog where most of my visitors are from Asia, I can include affiliates like Malaysian Airlines, . For some merchants, you would need to apply to get approval like TripAdvisor and Emirates.

With this, I can look out for the special campaigns that these merchants may have and post it on my site to give my visitors more choices.

As for fashion for Malaysian visitors, you have brands like Zalora, as well as a number of other brands.

6. Deep linking capabilities for some merchants

Deep linking means linking to a specific product page of that merchant. For example, if I want to promote a specific product, I can find the product via one of the merchants. From there, I go to Deeplink Generator, select the merchant and input the url. Involve Asia would then auto generate an affiliate link which I can paste it on my site.

If the link is too long, you also have the option to shorten the url.

Even though not all of their merchants (as it is dependent of the agreement and merchant’s system), it is a great feature for those merchants that have this.

Once I put in affiliate links to my sites, I am able to track how many clicks the link has generated almost immediately. The tracking covers the number of clicks, date, time and from which merchant it comes from.

When you see the clicks coming in almost real time, it gives you a boost to continue on. It is different from Amazon Affiliates where the report is only generated once every few days.

8. Constant updates of changes in affiliate program via email

The emails are really quite frequent but instead of sending many piece emails a day, they would try to compile and send out once a day or once every few days.

And if you are an active affiliate, you really need to read their emails. They pause, resume or change the commission structure relatively quickly. For example they recently paused the program for certain merchants and would notify you to remove the links first. But the emails are meant for each and every advertiser so you need to be on alert if your advertiser is one of them.

Depending on how you look at it, it can get annnoying especially if you have tonnes of links placed all over your blog on a particular merchant and after the program gets paused, you need to take down the links (well, you can choose not to take down but it would either lead to an error page or it would still go to the page but you would not be paid commission). Update: recently Involve Asia allow you to turn on the option to promote other similar advertisers.

In both my previous companies, I have often worked closely with the marketing team that launches huge projects. When you are doing a campaign which links to an external system, you basically have no control. The lead is sent to the company, they may somehow not capture or do not pay out as expected resulting in complaints from affiliates. It is better to pause the program to investigate rather than to more affiliates affected.

When you decide to monetize your blog actively via affiliate marketing, any affiliate program for that matter, you need to have a system in place to track where your affiliate links. This is so that when there changes, you can take down the links quickly.

Involve Asia is a good affiliate network to target traffic from Asia countries. They have a few hundred merchants spread out for different countries in Asia.

Note: It is an affiliate link and once you sign up, you would help me earn RM5 at no cost to you. I would be writing more posts in future about Involve Asia. Please consider subscribing to this blog to receive more updates.

ACCESSTRADE (affiliate network)
Can a blogger from Malaysia make a full time living from blogging?
Receiving my first payout from Amazon.com (US)
My experience in listing items in Carousell
Spread the love